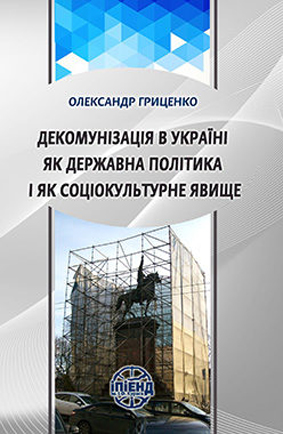 Decommunization in Ukraine as a Public Policy and as a Cultural Phenomenon.

A monograph analyses contemporary stage of the decommunization process in Ukraine initiated by the so-called ‘decommunization laws’ on April 9, 2015. It briefly reviews previous domestic experience of decommunization as well, both in its spontaneous manifestations such as ‘Leninopad’ in winter 2013-2014 and in the form of dismantling of the monuments to Soviet leaders who participated in the organization of Holodomor, initiated by President V. Yushchenko’s decrees in 2007-2009. A new stage of this process, larger and more comprehensive, launched in the spring of 2015, is analyzed from two methodologically different perspectives: first, as public policy measures (according to the methodology of public policy analysis), second, as a sociocultural phenomenon according to cultural studies approach, which presumes a systemic analysis of five key aspects of a cultural phenomenon, namely, its production (creation), its consumption (reception), its regulation (by the state and other actors), its representation in culture (including narratives about it), and identities shaped or transformed by it.

© Institute for Cultural Research of the National Academy of Arts of Ukraine, 2019.

© Ivan Kuras Institute of Political and Ethnonational Studies of the National Academy of Sciences of Ukraine, 2019.

Decommunization in Ukraine as a Public Policy and as a Cultural Phenomenon. 2019 (ukr.). pdf